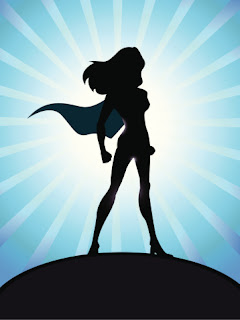 Superheros is one of my favorite songs from the Rocky Horror Picture Show. I can't say I'm really a fan of the film itself, but the songs are really interesting. I used this one because it fits the theme I want to talk about.

It's been a recent realization that everything I've thought of as "bad" emotion or a personal flaw in thinking, might actually be a super hero power that I lack instructions on how to use properly.

The idea of a caped crusader not knowing how to use their powers isn't new. And every one of the Guardians of the Galaxy has their own kryptonite and personal failings. None of us are alone in that.

They even produced an entire TV series featuring Ralph, a teacher, who receives a super hero suit complete with cape. Leaving the alien encounter with the box with the suit inside, the instruction book falls to the ground. Ralph then has to figure out the suit all on his own. I especially like one scene where a boy sees him trying to fly and tells him he's not doing it right. "Ya gotta take three steps and put your arms out." It works and Ralph becomes the Greatest American Hero.

We wont be as lucky as Ralph to find an observant kid to guide us. Often the lessons take painful experiences repeated over sometimes generations.

Though I wish it had been a better relationship lesson for her own sake, I did learn from my mother how to use my romantic relationship super power. It comes in a variety of flavors, but goes something like this: Don't marry drunks, don't let anyone beat on you and don't look in places where people do the things you don't like. Mom taught me the lesson by repeating this pattern.

I guess my mother is a great example of a person who never realized her own personal abilities. I'm grateful, I wish she had taught me more so I didn't have to figure a few things on my own. Like I knew to avoid abusive drunks, but it never occurred to me that there were sober assholes out there. That would have been useful information. I'm doubtful she knew that.

So some flaws are fairly easy to see as a power. They even make comic books out of some of them. The Incredible Hulk gets angry and though he ruins his clothes and smashes random things, he usually helps others with his rage.

I feel feelings of my own anger let me know something around me is wrong. Now that wrongness may or may not be solvable, but it's rarely random or arbitrary.

I count my general sense of emotion as one of my super hero powers. That ability to see, emulate and respond to others saved my life. Growing up with erratic caregivers means THEIR emotional state can make my life hellish. I learned to read them enough to avoid them when they were dealing with their own wounds. Such powers are not always effective, but they can be embraced for what they can do.

Take your biggest flaw, the thing that you are afraid people will find out about you. The one that when someone points it out you apologize for. Could it be an untapped ability?

Is there a chance that it exists for a reason and you just haven't figured it out as yet? Think on it, get back to me. I'm going to get a copy of the Greatest American Hero series and have a look at how Ralph sorted his awesomeness.
Posted by CourageUs at 9:22 AM No comments, Post a Comment

I've shared this thought before, but it came back into my mind recently. What if you live in an apartment on the ground floor and a new person moved in above you. Their bedroom is just above your's and each night they take off their shoes and throw them on the floor. The previous tenant did the same thing so you got used to it. You'd hear "clunk" and a few seconds later a second "clunk."

This new person, that you haven't met yet as your schedules are different makes only one clunk. You lay there awake each night waiting for the second sound. You toss and turn, shake your fist at the ceiling and begin to bite your nails. Determined to confront the person driving you crazy, you storm up the stairs, pound on their door and demand they start double clunking.

When they get to the door you happen to glance down and notice they have only one foot. DOH. They're NEVER going to double clunk. It's not part of who they are.

We look at other people all the time and make all kinds of assumptions about them, their habits and their value. It is human nature. Some of us have been so profoundly hurt that we go into the world with our emotional shields up and quickly evaluate those around us for at what level they can hurt us. This coping strategy may be useful in some situations and it may also be keeping us from being calm and finding friends.

Stress hormones can make us sick. Being sick can create stress hormones. This vicious cycle perpetuates when we put energy in at regular intervals. We can choose another way.

I start with awareness. It comforts me to have a leave the house ritual. I check for my house key, my paratransit card or money to pay for a new one, I grab my water on exercise days and lunch if I am going to work.

If I am going to make up what is going to happen in my world outside my house, I decided a while ago that my fantasy is going to be a positive experience. The truth is, none of us ever know what may happen. Mostly nothing. Life, for me at least, is a series of routines. There are four paratransit drivers, there are a handful of gals at my gym and there are work duties that tend to be the same or similar.

When there is a break from these routines, it tends to be a reasonable variation. Work recently had a seminar away from the office. I've been to seminars before so I just pictured what they were like in my mind before this one. I chose an open and curious mental state.

Maybe this all sounds oversimplified, some of us need to break it down like that. I suffer social anxiety, post traumatic stress and a tendency to want to avoid interacting with strangers. At the same time, I love new experiences and meeting new people.

I'm teaching myself to adjust to all that newness with an open heart. So what if the guy upstairs has only one foot. Maybe he's a great person and will teach you things you never even considered. At the very least, you will gain a new sleep routine.
Posted by CourageUs at 7:03 AM No comments, Post a Comment