The More We Get Together 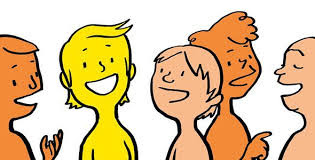 New years eve I participated in a twitter #ideaparty hosted by Barbara Sher. She suggested Meetup.org for finding local friends. Boy did it work good.

It never occurred to me that atheists would have a meeting local to me. When I saw them on that list, I felt elated. It's exactly "my thing."

Faith and church felt like alien concepts to me. I thought about going to one just for the fellowship aspects. Then I realized that would be so hypocritical and very uncomfortable. I know me, I would say something about inconsistent interpretations of biblical teaching.

What I understand of Christ makes me think that he had some interesting things to say. I have no problem with discussing his philosophical point of view. I know less about Mohamed but I bet he has some intriguing concepts as well.

How other people choose to navigate the social landscape has little to do with me. I ask lots of questions about that which I sense around me. These observations lead me to a conclusion of random happenstance.

Should some evidence of a higher power show in my sensing of data, I would adjust my world view. Until such time, i remain skeptical of the notion of god.

As a small child, I don't remember ever feeling valued in church. My sister loved it and felt the fellowship that comes from participation. I'm not sure how much this had to do with the way I was treated or if the lack of faith was innate in my mind even that early.

The faith came from my family tradition. I don't know how other churches treat children. I felt as though I was a nuisance to everyone there. Plus I was forced to go. I don't suppose that makes for positive memories. I like having choices.

My family didn't want me. That's why my sister and I were living with the devout lady. She didn't want me, she wanted my sister. When she beat me up in church, I felt that no one in the congregation cared. I felt like they thought I was "bad."

I remember Sunday School, but I don't remember learning anything or enjoying any friendship or acceptance there. It's not being different, as my sister has albinism just like me.

I guess I'm strangely grateful that they were unkind. I might have been seduced by friendship and acceptance. I like being an atheist. I like asking questions and chatting with others who question things too.

The more I think about faith, the more I find I have no need for it in my real life. Though it may be a bit of a challenge to find people who think as I do, they do exist and do value my company. Just as important, *I* value my company.

How other people run their philosophical life is none of my business. If someone has a deep faith, I can respect that to the point they don't bother me over it. Some have crossed that and I wish them peace and let them go. Life's way too short to worry over being judged by someone.

It's just an untestable theory, but I suspect I could hang with Christ. I suspect he would discuss things with me, but let me make up my own mind. At least that's my interpretation of his attitude. In a way I am the leper and he hung out with them.

Who do you hang out with and why?