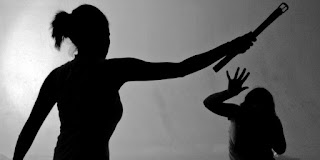 As part of the series on Adverse Childhood Experience (ACE), physical abuse seems to be a common complaint. I would say that the severity can go on a scale from spanking to child murder. It seems that most abusers repeat patterns they learned from their own childhood or they have a mental illness driving their hurtful actions. Hurt people hurt people, as they say in recovery.

Here is my ACE:
2. Did a parent or other adult in the household often or very often… Push, grab, slap, or throw something at you? or Ever hit you so hard that you had marks or were injured? Most definitely yes.

Here is my resilience:
14. I believed that life is what you make it.

The primary physical abusers in my life were both women. The most severe trauma happened at the hands of a guardian my sister and I lived with for about 18 months. I'm left with lasting emotional scars and Post Traumatic Stress because of this person tasked with taking care of me.

Skip this part if you cannot handle knowing what my guardian did to a 6 and 7 year old kid. I'll leave a marker to jump to.

I'll just list what I remember:
Beating with Hot Wheel race tracks
Hitting while eating and being force fed
Random slapping and punching
Choking
Picked up and thrown into a sink, head first.
Required to stand still after a beating (passing out I cut open my chin once on a drawer knob and woke up in a puddle of blood)
Though these are emotionally abusive actions, they highlighted the climate of fear that I lived inside:
Intentional destruction of my belongings.
Policing bathroom habits in public
Encouraged abuse of other children
Policing play with abuse as a consequence to not following her random weird rules
Calling me all kinds of names, but the one that I remember most is "Unmanageable child."

My mother did these things to me:
Pulled me around the house by the hair
Smacked me with the hair brush until I refused to let her brush my hair
Kicked me
Pushed me
Refused medical care when I got injured playing outside (I hope that if any of these had been life threatening, she would have sought treatment, but I don't know for sure.)
There are far too many emotional abuses to list. Suffice to say that my mother didn't want me around.

Though both my mother and the guardian specifically targeted me, for some reason I didn't believe it was all about me. My daddy helped by before I lived with the guardian, he showed me lots of love. Mom was there, but I didn't bond to her. I did bond to my oldest sister. She was as good to me as she was capable of. I have no memory of her abusing me physically.

I used things like my friend's home life and the Brady Bunch as examples. They taught me that people can be reasonable with each other. Places where parents didn't yell or hit each other or drank to excess showed me a whole new way of life.

I tried to have conversations with my sisters and even my mother about the abuse. I didn't know at the time that my mother at least couldn't help me heal. As I grew up and got out into the world, I found counseling and support that took only a few consistent meetings to set some major things straight.

I even bought a book on parenting myself, and others on having a good relationship with your spouse. Unfortunately, I picked a first spouse that didn't respond to my efforts.

I made my life and continue to make things better with learning and exploring about myself. Though I cry easily and often, it's from awareness more than grief. I don't just BELIEVE life is what you make it, I MAKE IT SO!

Email ThisBlogThis!Share to TwitterShare to FacebookShare to Pinterest
Labels: ACEs

A rapist asshole got released from jail this week and it sent me into an emotional tailspin. Said rapist received a ludicrously low sentence of only six months in jail and only served three.

I wish I could speak to the survivor and let her know there's hope and recovery. Her letter before the judge told of how she felt irrevocably broken. I know that feeling. I also know that one can find a path where it's just a small part of the feelings associated with surviving such a tragic event.

This upsets me so because I survived a year of my stepfather using my tiny little seven year old body for his own twisted actions. It wasn't until I was in my 30's that my mom told me that she thought of him as an "animal" and she didn't want us girls around this guy. She denied it when I told her after they separated though. That's not unusual for her, as some jokingly say, my mom lived in Egypt.(in de nile)

I have only flashes of memory of what was done to me, so there are some that have questioned my memories. I feel sorry for the callous folks who might think that's a reason to discount such stories. For the longest time I didn't call what happened rape, because I heard rape was a violent crime. I realize now that in can be an act of dominance.

On a child of seven, nothing about it could ever be called consensual. That confused me also, because what I do remember, did involve a physical sensation of pleasure. More like a sense of relief than enjoyment. Like having a good bowel movement or peeing when you really have to go.

Before I lived with my mother and her husband, I lived with a woman who beat me so severely that I have post traumatic stress. My little psyche wanted a caring adult to be kind to me. He used my neediness to use me to satisfy is disturbed urges.

At 12, I started my road to recovery after seeing a woman on a talk show talk about how she drank to cover up her pain from being molested. I decided then and there that I would tell people what happened to me and seek help. This didn't set well with my family.

My sister told me she was molested by my mom's brother and I should just get over it. Mom told me that I should stop dwelling on the past. I didn't want to be a drunk, I saw that had such a terrible outcome on my mother.

Feeling sad and depressed, i was recounting my story to some friends online. I quoted the dramatic statistic of 1 in 4 girls surviving childhood sexual abuse. This guy that I regarded a dear friend denied that number. He told me if it's that high, it is just part of life and I needed to get over it. It made me cry for a couple of days that I had to end a friendship over such denial.

As recently as the last year, I read that my state is devoting $60 million to testing the rape kit backlog. I remember this being a problem 30 years ago, but I'm shocked and dismayed that it's still a problem.

Today I read the story of a woman who survived abduction and rape and the police would not do anything because she had some life struggles of her own. The officers even treated her with disdain and contempt even going so far as to deny anything had happened to her.

Denial helps no one.

One of my counselors told me a story of a client's mother who would get drunk and literally hand over her child to the man who molested her. Though technically, my mother didn't do that, she did know he was "an animal." Instead of getting rid of said animal, she pushed me out and made me go live with my older sister.

Later in life mom told me a story that she didn't blame me for their divorce. She said she caught him in bed with a man. I dunno who had the higher order of sickness, him or her.

Our society needs to stop ignoring rapists. We can start by expecting and if us survivors have to do it ourselves, demanding the testing of all rape kits collected, then using the DNA results to match against the sex offender databases.

We need to stop revictimizing survivors by blaming them and forgiving rapists. Dressing provocatively or being intoxicated does not give anyone permission to commit a crime. If that were the case, anyone convicted of driving under the influence should be released.

I'm not asking anyone who survived to use their name in public, but why should there be ANY shame on the part of the survivor? We don't withhold the survivor of a mugging or attempted murder's name.

How about we teach boys and young men about consent? Lets start with letting them know that not everyone wants their attention and that's okay. Waving to a freind is just as fun as hugging them.